Highlands farms, Walking through Iceland’s past 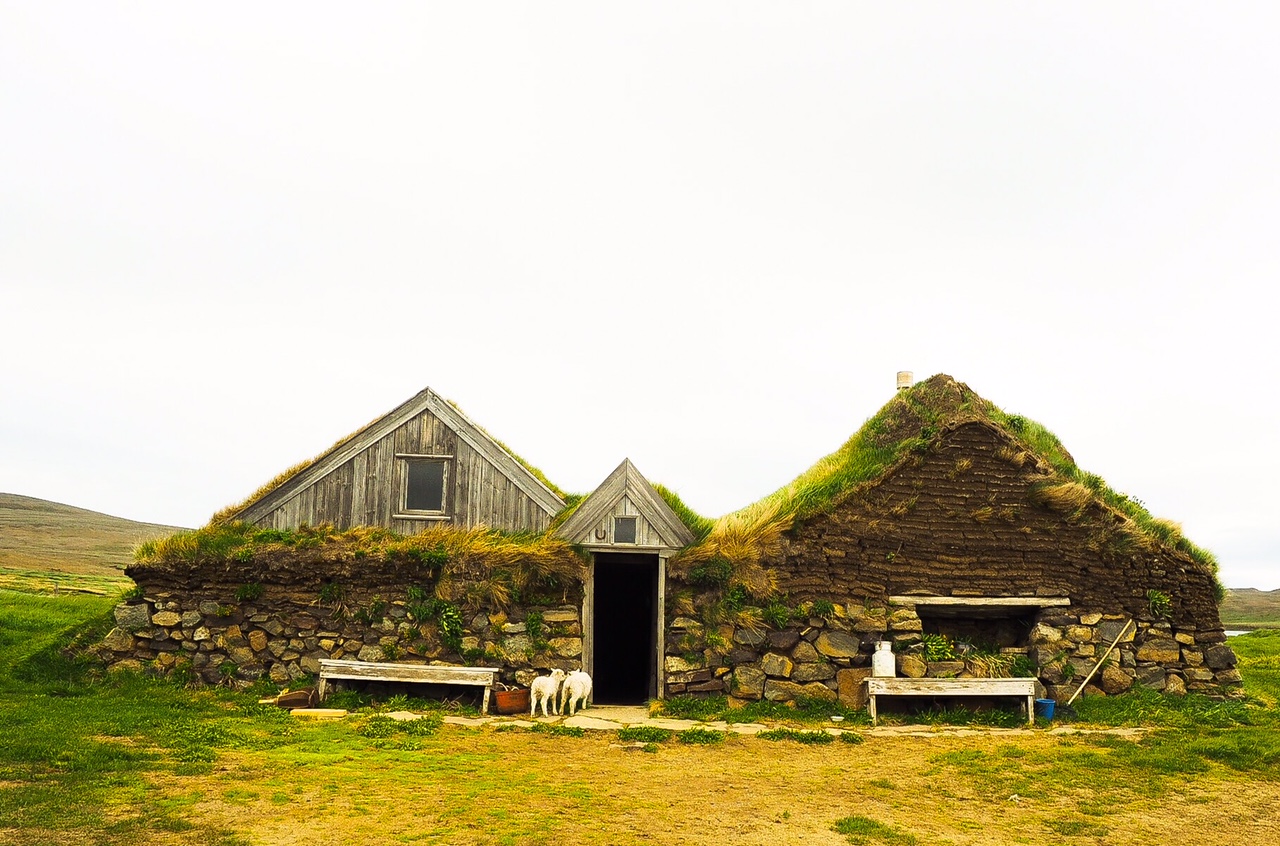 The Fljótsdalshérað Touring Club, the municipality of Fljótsdalshérað and Vopnafjörður ́s cultural and educational centre Kaupvangur have joined forces to increase cultural tourism services in Jökuldalsheiði and other nearby highlands. The old highland farms in these areas are being connected to each other by hiking trails. Receptacles are located at each set of ruins, containing a guestbook and a stamp along with information about that farm, including its residents and history. Cards for stamping at each site are sold at Sænautasel, campingplace in Egilsstaðir and information centres in Egilsstaðir and Vopnafjörður. Those who submit cards stamped at 10 farms will get a certificicate from the Touring club. 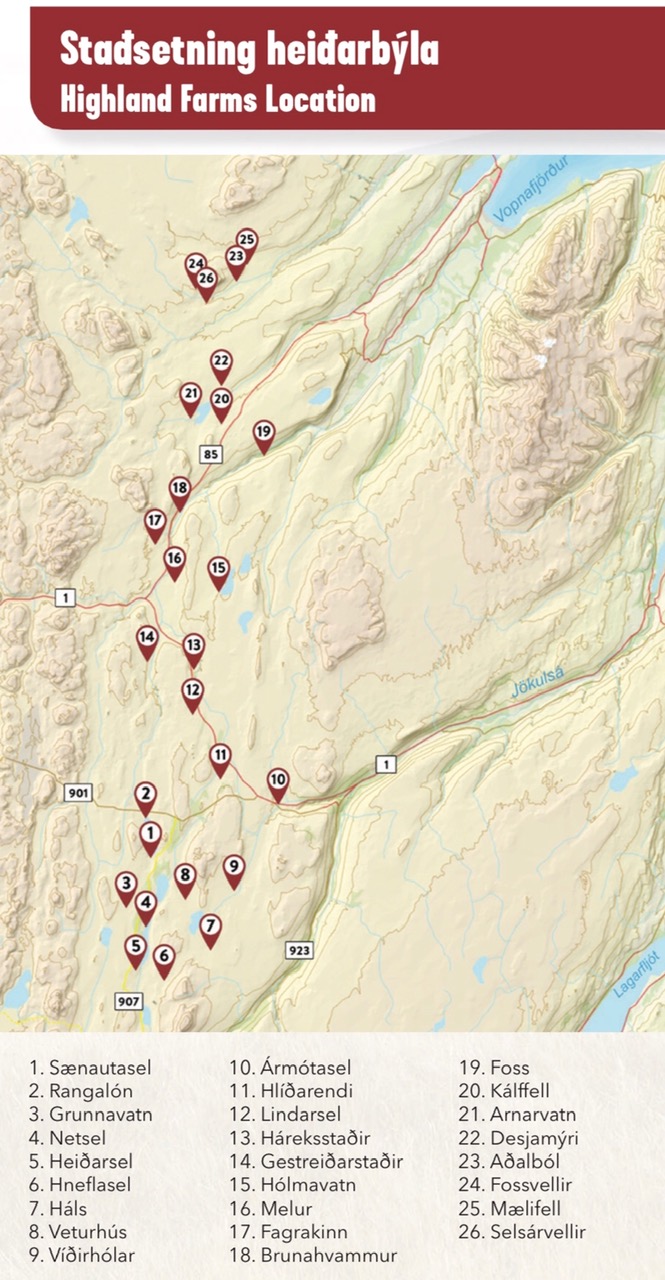 Those who submit cards stamped at 10 farms will get a certificicate from the Touring club.
It is important that the hiker be able to appreciate the historical uniqueness of this rural highland community, now visible through farm remains. During the 19th century, a wave of settlement began in the Jökuldalsheiði highland, meaning turf farmsteads that were fixed, year-round residences. this period of habitation lasted for just over a century, or from 1841 to 1946. There were eventually 16 Jökuldalsheiði farms, established between 1841 to 1862. Most of those who settled there, often building on the sites of old summertime farm outposts, came from the valleys of Fljótsdalshérað, although some hailed from elsewhere, mainly North Iceland and the East Fjords. At its height, the Jökuldalsheiði community had a population of 120. Besides these 16 farmsteads, the hiking trails on the map include the farm Netsel, five others on the moors of Vopnafjörður: Brunahvammur, Foss, Kálffell, Arnarvatn and Desjamýri and in Selárdalur: Aðalból, Fossvellir, Mælifell og Selsárvellir.

Due to the Askja volcanic eruption of 1875, all of the farms then occupied in the hard-hit southern section of this community were abandoned , with the exception of Rangalón. Háls farm had been deserted previously. However, some of the deserted farms were resettled a few years later. The ash fanned out eastwards from Askja, covering a large area, though falling thickest on the highlands. Some of the highland farms were severely affected. As a result, many inhabitants moved away, first down into surrounding farming communities, but in many cases eventually west to the Americas. Thus, many Norh Americans of Icelandic heritage are the decendents of people from Jökuldalsheiði and surroundings.

Historically, residents from throughout this highland region went to market almost exclusively at Vopnafjörður. From Veturhús, this meant a route of 75 km each way. Most of the trails to town and between farms were fairly easy, but the lengthy distances prevented frequent journeys. In 1934, North and East Iceland were connected by a road which passed along the shore of Sænautavatn lake, beside Rangalón. This led the farmers on Jökuldalsheiði to trade at the cooperative in Reyðarfjörður, farther south. By then only four farms remained on Jökuldalsheiði: Sænautasel, Veturhús, Ármótasel and Heiðarsel. On the other hand, residents on moors closer to Vopnafjörður, i.e. at Brunahvammur, Arnarvatn and Foss, continued to do business there.

Highland farming conditions were favourable in various ways, even though many places tended to receive heavy snow since most of the farmsteads were situated over 500 m above sea level. Most of the lakes had excellent trout fishing, and there were plenty of ptarmigan to hunt in winter, as well as an abundance of geese, ducks and swans in summer. While reindeer ranged freely there, the stock is thought to have reached a historical lowpoint soon after 1900, so that they were soon declared a protected species.

The highland farms have often been treated in Icelandic literature, for instance in works by Gunnar Gunnarsson and Halldór Stefánsson. Iceland ́s only Nobel Prize winner, Halldór Laxness, received there inspiration for the novel Independent People. On his way to North Iceland, he spent several days at Eiríksstaðir, then went north through Jökuldalsheiði, visiting for instance Veturhús and over- nighting at Sænautasel. Veturhús is believed to have provided the model for the novel ́s farm Sumarhús, and its farmer named Bjartur to have been based on various local characters. 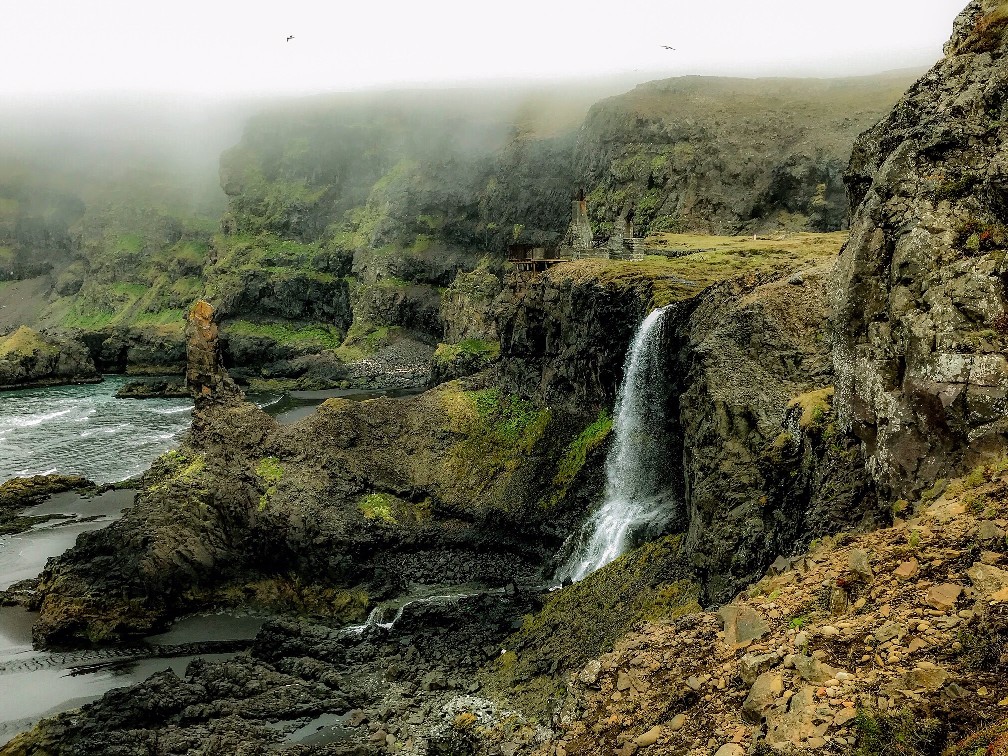 The Touring Club of Fljótsdalshérað runs and operates seven huts and lodges with sleeping accomodations, some located in the mountains and others in secluded places in the inlets and fjords south of Borgarfjörður eystri – reaching as far as Seyðisförður. The latest lodge is in Loðmundar-fjörður and is run, as the ones in Breiðavík and Húsavík, in close co-operation with the Touring Group in Borgarfjörður Eystri.