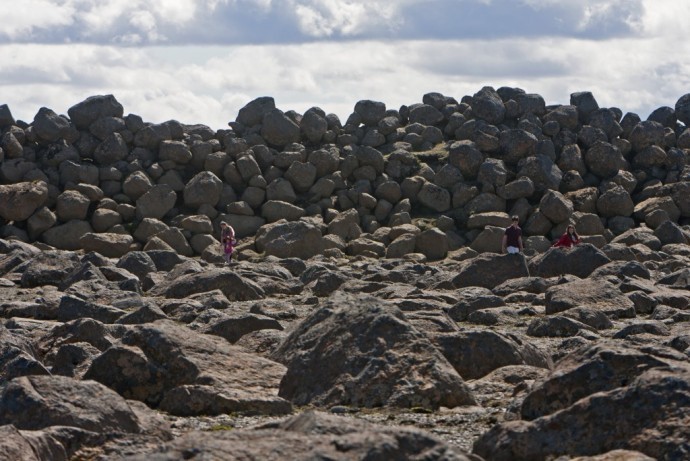 Skessugarður – the Rampart of the Giantess is a natural phenomenon in East-Iceland, which has been called one of the most amazing natural formations in the country. It was formed by an ice-age glacier, Brúarjökull. It is a large arche-shaped moraine and consists of massive boulders (porphyritic basalt) making up a ca 300 meter’s long and ca 7meter’s high natural wall.  It lies from west to east. It markes the stagnation level of Brúarjökull at the end of the last glacial period.

After the stagnation of the glacier, a flood followed which washed this area clean of smaller rock leaving behind the big ones which makes this moraine unique as it lacks all smaller, finer sand particles and stones, or the glacial flour.

Skessugarður is located by the lake Grjótgarðsvatn west of Sænautasel turf house on the other side of Mt. Sænautafell. Turn left onto the old ring-road (number 907, a gravel road) after you leave Sænautasel and drive for a couple of km. Then turn left onto a dirt road, which turns into a track until you reach Skessugarður after 2 km.