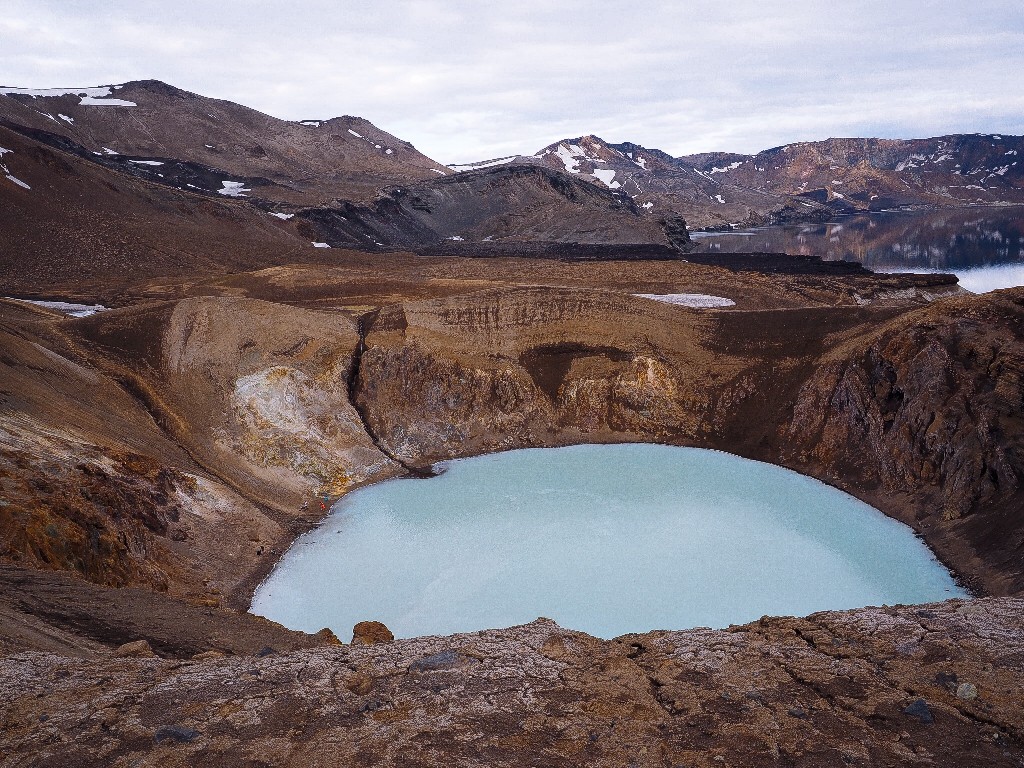 There are countless beautiful sights accessible along the Ring Road, leaving the highlands mostly untouched. There is some of the most unspoiled landscapes you’ll ever see.
Among these landscapes is the famous Askja Caldera (50 km2) in the Dyngjufjoll Mountains, on the northern side of the Vatnajökull National Park. The mountains emerged in eruptions under an Ice Age glacier cap. Askja itself was formed, for the most part, at the end of the Ice Age in a major ash eruption which caused the roof of the magma chamber at the heart of the central volcano to subside.
The caldera contains several volcanoes, including Víti (explosive volcanic crater). Water has accumulated in the crater, its temperature is variable – it is around 30°C on average. Víti is a popular bathing site, but if you intend taking a dip, please be aware that the sloping path is very slippery in wet weather.
Be mindful that you need a 4×4 vehicle to access Askja as there are some unabridged rivers to cross. The road to Askja goes from road 1 to road 901 and onto mountain road F905. Onward to F910 to Drekagil. You’ll encounter your first river crossing around 5 kilometers after you enter the F910, with the second one following just a few minutes after. There is a total of three water crossings on this route, but the first one you’ll see is quite shallow and easy to pass, so it is not even marked on maps as a river crossing.
From Drekagil goes mountain road F894 (8 km) to the car park at Vikraborgir.
Another option is to go from road 1 to mountain road F88 via Herðubreiðarlindir to Drekagil. This is not recommended as this F road has several fords and river crossings that are not passable with a 4×4. You need a special vehicle with sufficient clearance and a snorkel to be able to cross them. Stick to the route shown above (F905/F910) as it is the easiest.
The drive takes about three hours each way from Road 1.
The hike to Víti takes approx. 45 minutes each way. It is fairly easy as the volcanic valley is mostly flat. The area was used during training for the Apollo program in the 60’s to prepare astronauts for the lunar missions due to its volcanic composition.
From the rim of Lake Öskjuvatn is a stunning view of Dyngjufjoll Mountains and the crater Víti, which name in fact, the name means “hell.” If the temperatures of the water is decent, it is possible to bathe in the crater. It is important to seek advise from the rangers first.
This part of the country is only accessible for a few months of the year, mostly from May to September, depending on the weather and road conditions. 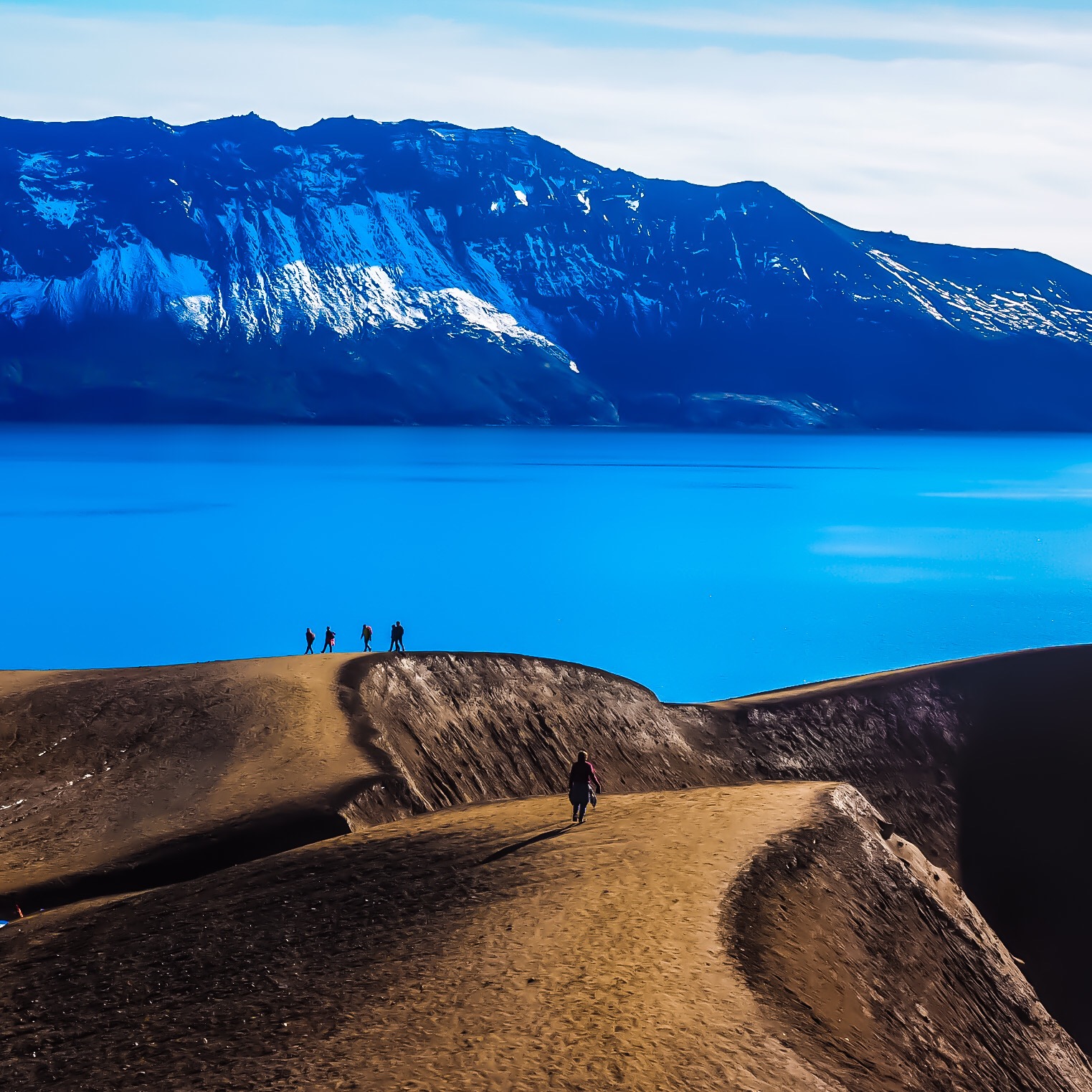 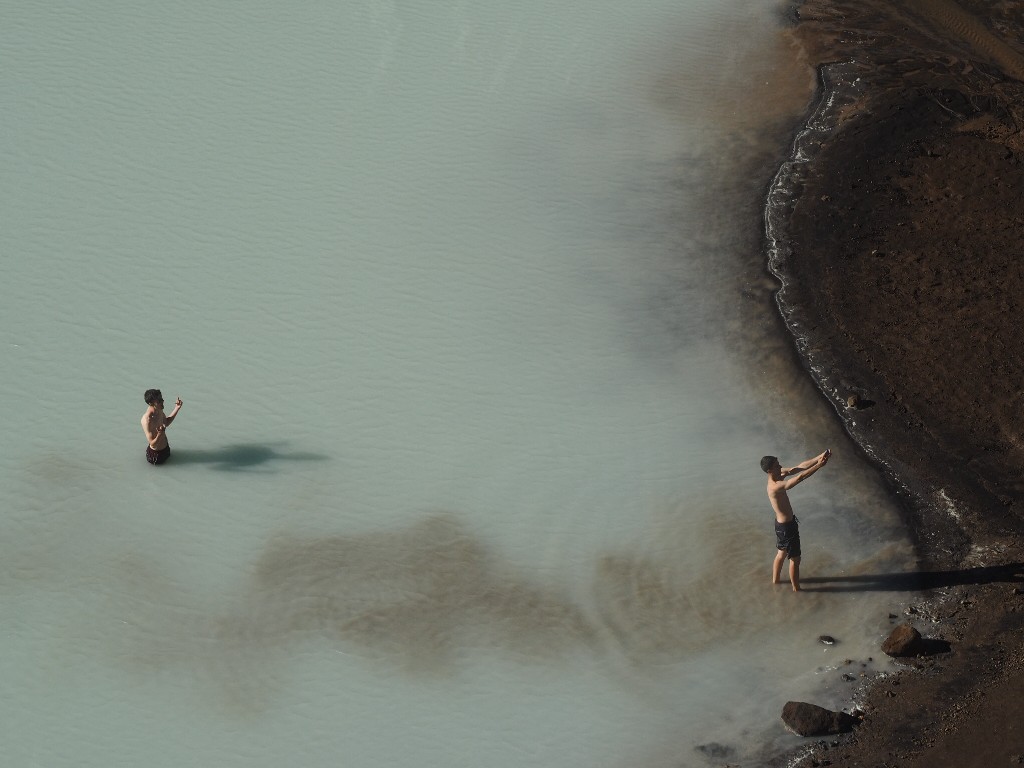